So yesterday I finally arrived after 11 hours of flying, sitting next to this huge Japanese guy so I cannot say it was that comfy. Getting through customs and getting my luggage back went quite smoothly(still with all the decoration intact!) , and afterwards it was time to pick up two things at the airport:
– JR train pass
– Sakurai mobile simcard.

The simcard was delivered to the post office at Narita airport (it’s where I landed) and not that hard to find. Same goes for the JR pass, when you’re heading towards the trains you’ll pass it.

There was a pretty big waiting line at the JR office, and the lady in front suggested that I should do some other things first since it would take an hour before it was my turn. Stubborn as I am I said it was okay and waited in line.
After 20 minutes (maybe Japanese hours are shorter?) I walked out with my train pass and headed towards Shibuya to visit my niece Anya!
Anya had suggested me that at Shibuya station I could take a taxi which would bring me right to her house, but being a true Dutch and it didn’t seem that far I started walking using Google maps.
When I entered the address in Maps, it gave me 3 possible options: so I went with the first one…

After walking for half an hour I arrived at my “destination”, but nowhere could I find some indication if I was at the correct place (I expected an English nameplate on a house, but it was nowhere to be found)
But, no worries! I still had Anya’s mobile number: “the number you have dialed is currently not in use”… Crap

Good thing I had my Internet working, so I mailed her, hoping see would see the email soon, and she did!
” Hi Marcel! Where are you? ”
” Uhm, I’m not sure, Google told me to go here. I’m in front of some hotel or something called “Breeze”…”
“Stay where you are and I’ll pick you up! ”

I was (somewhat) close though, it seemed I should’ve picked the second option in Google maps and it would’ve directed me to the correct house.

So yesterday I caught up with Anya, Chris (and Molly), even shortly saw her two, really shy, sons 😉 unloaded a few gifts for Anya and her family from my luggage (mostly Frysian and Sinterklaas related things) and afterwards we went to the Gonpachi restaurant.

Now the Gonpachi is a really great place, probably known best for its relation to the movie Kill Bill. (the set of the big fighting scene in Kill Bill was inspired by this restaurant).
The food was great, and we ordered a lot of great dishes!
After we stuffed ourselves we went back to Anya’s place riding our electric bikes
(sidenote: electric bikes are a true must have in Tokyo!)

After a good sleep I woke up this morning (luckily not jetlagged) , planned a few things more for my trip, and headed towards Shinagawa station to take the shinkansen to my next destination: Hiroshima!

Anya was really sweet and made my a small lunch for my 5 hour trip, it even included a beer since “all the business man drink that on the train in the morning” (according to Anya ;-)) 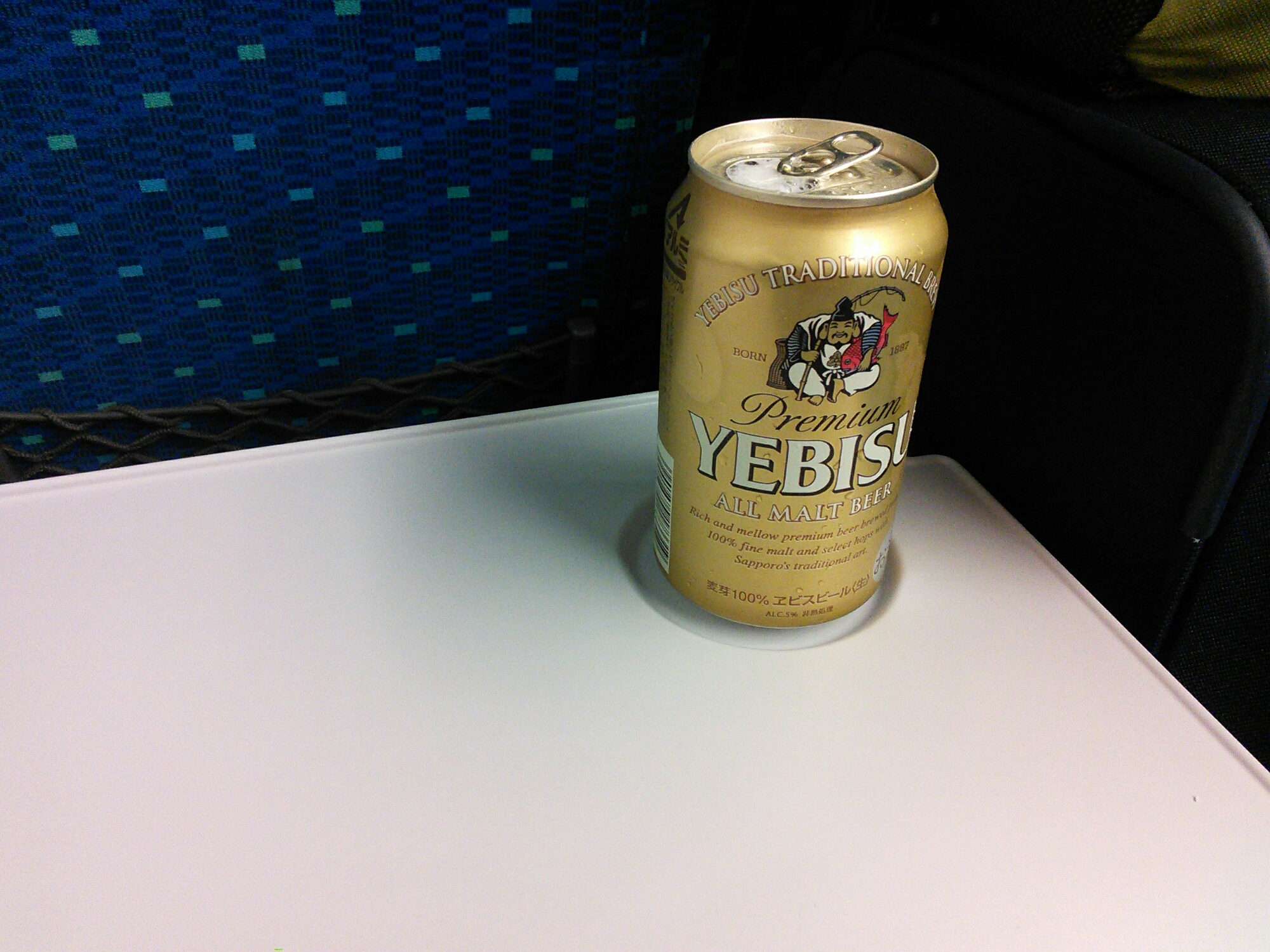 Last time Syb and I also put a TLDR; at the end of our posts (Too Long, Didn’t Read) and I completely understand people hate to read pages of crap and just want a summary of what I did, so here it goes!

TLDR; Sat next to big Japanese guy in plane, headed towards Anya, got lost, got un-lost, had awesome dinner, drinking beer while headed for Hiroshima.

Currently waiting at Schiphol for my flight to Tokyo!

To save some time I decided to leave for my parents house yesterday so I could save some time today getting to the airport.
Thinking I had everything with me; “flight ticket, check! Passport, check!” I arrived at my parents house.
This morning, when I was still waking up, I thought to myself: “ah, when I arrive in Tokyo I should not forget to exchange my JR train voucher for the real ticket….. Crap!

Yesterday I completely forgot about packing the voucher! Luckily it was still early so we made a detour to get the voucher, waved our ferrets goodbye (again) and left for Schiphol.

At Schiphol my girlfriend, my mom and myself grabbed something to drink and eat, but then it was really time to check in and say goodbye 🙁

So now I’m here at Schiphol waiting for the boarding. Yesterday I also made some customisations to my suitcase so it should be easier to find when picking in up again in Tokyo (hopefully they’ll stick!) 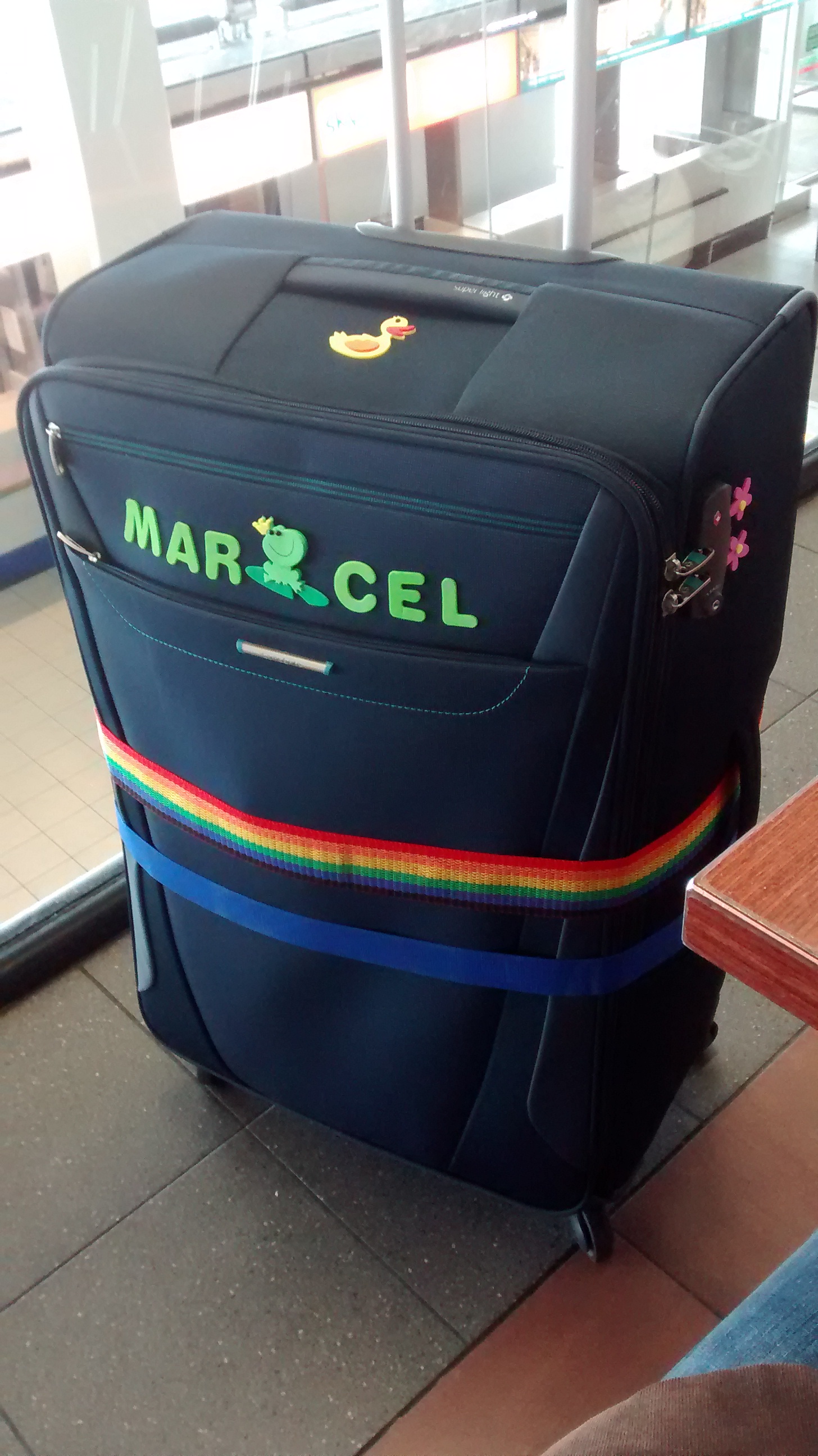 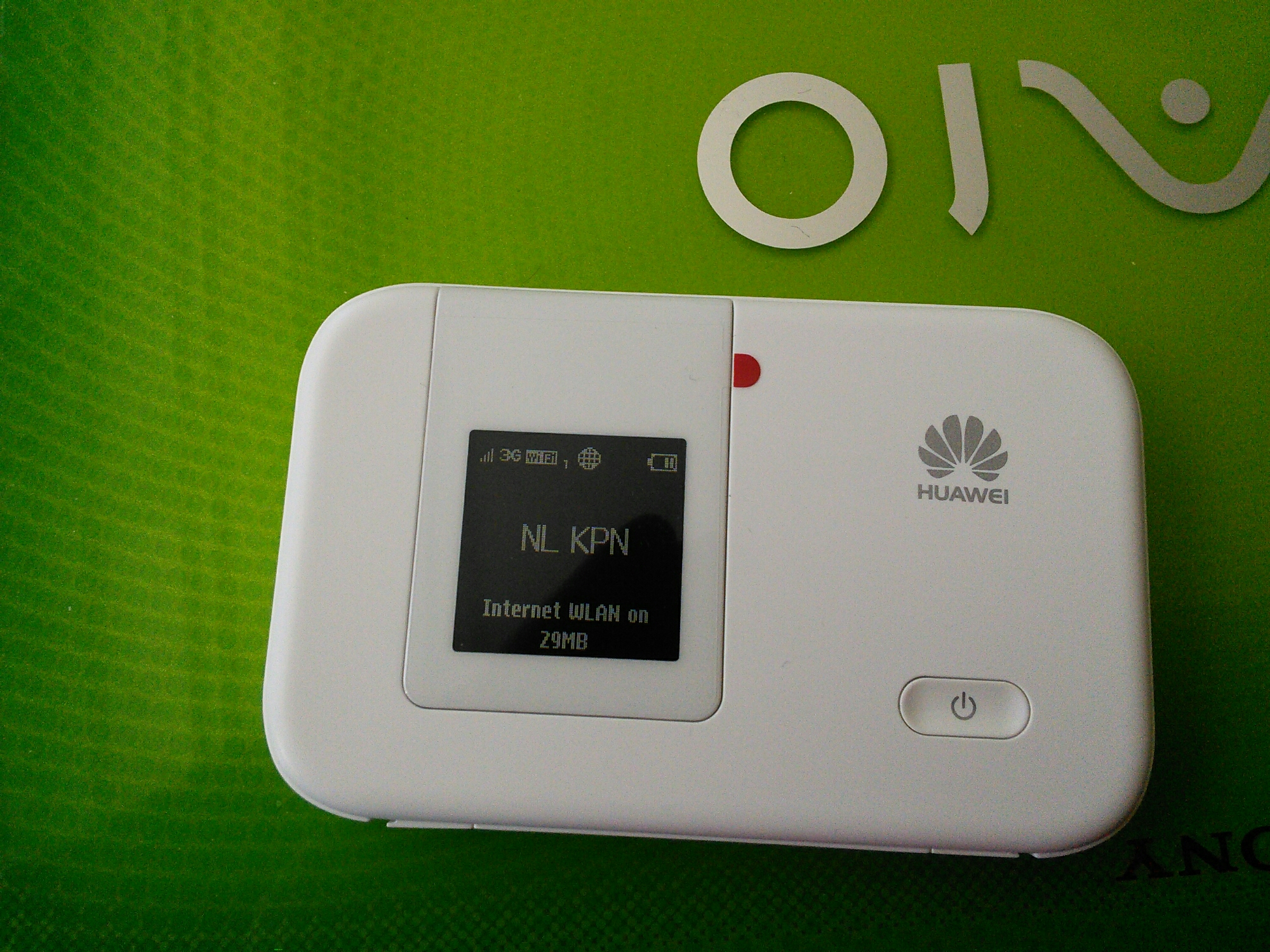 To make sure I’ll be able to update my blog anywhere/anytime I purchased a Mobile WiFi (MiFi) device. This awesome piece of hardware will give me 4g connection wherever I go!

Now I just have to order a Japanese simcard and I’m all set!

– Hotels are booked
– Plans are made (with enough tolerance for last minute changes)
– Japan rail pass voucher is here! It was a lot cheaper compared to last time (€120 less!)
– Still looking into the whole prepaid simcard thing, but I think I’ve found a great offer which let’s me use more than enough enough data 😉
– In addition to the prepaid thing I’m expecting to receive my brand spanking new Mifi router within a few days. Always online kicks ass!
– Travel plans are online now, check them out Here 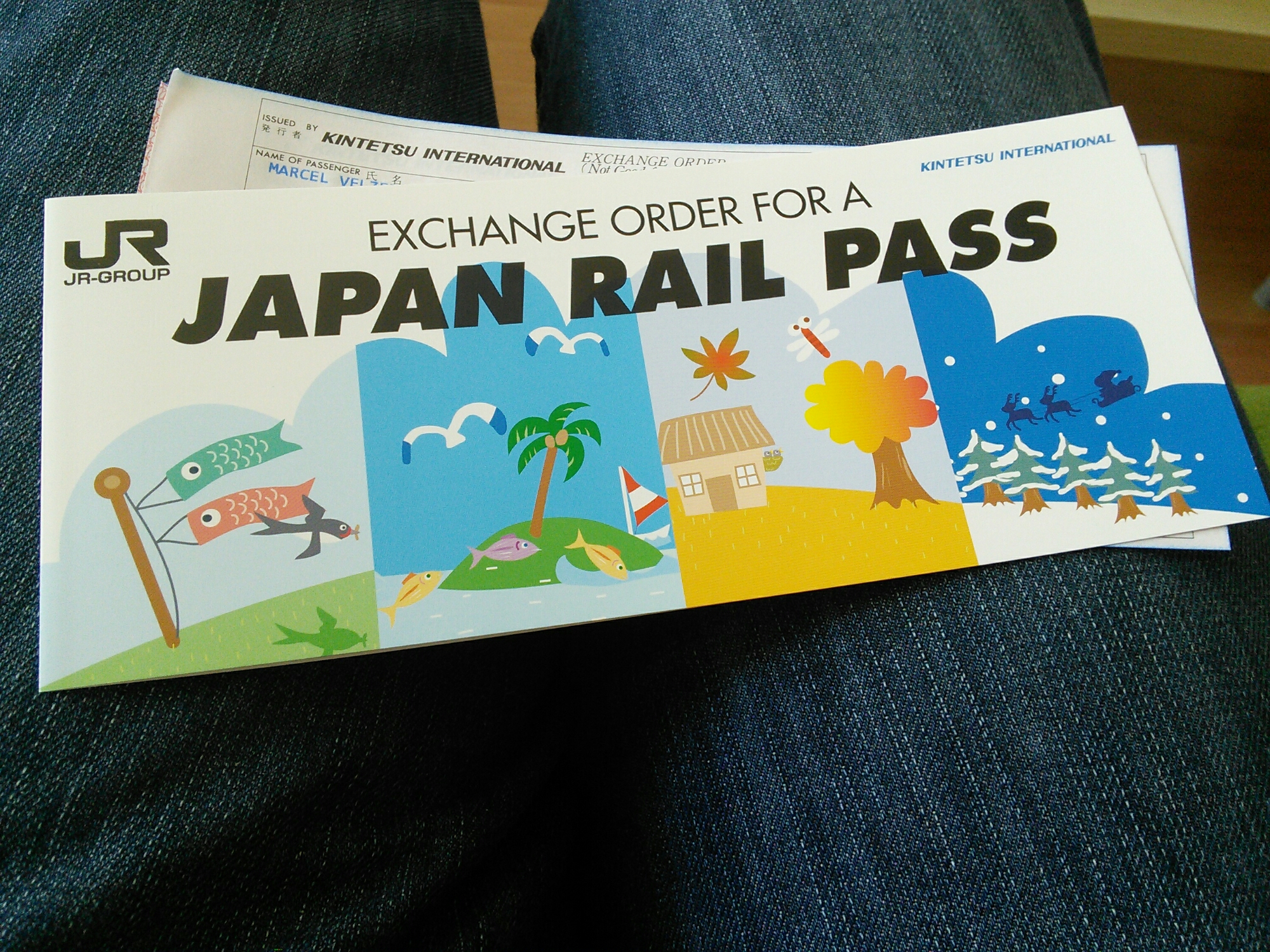 Really excited about the trip, only a few weeks left! 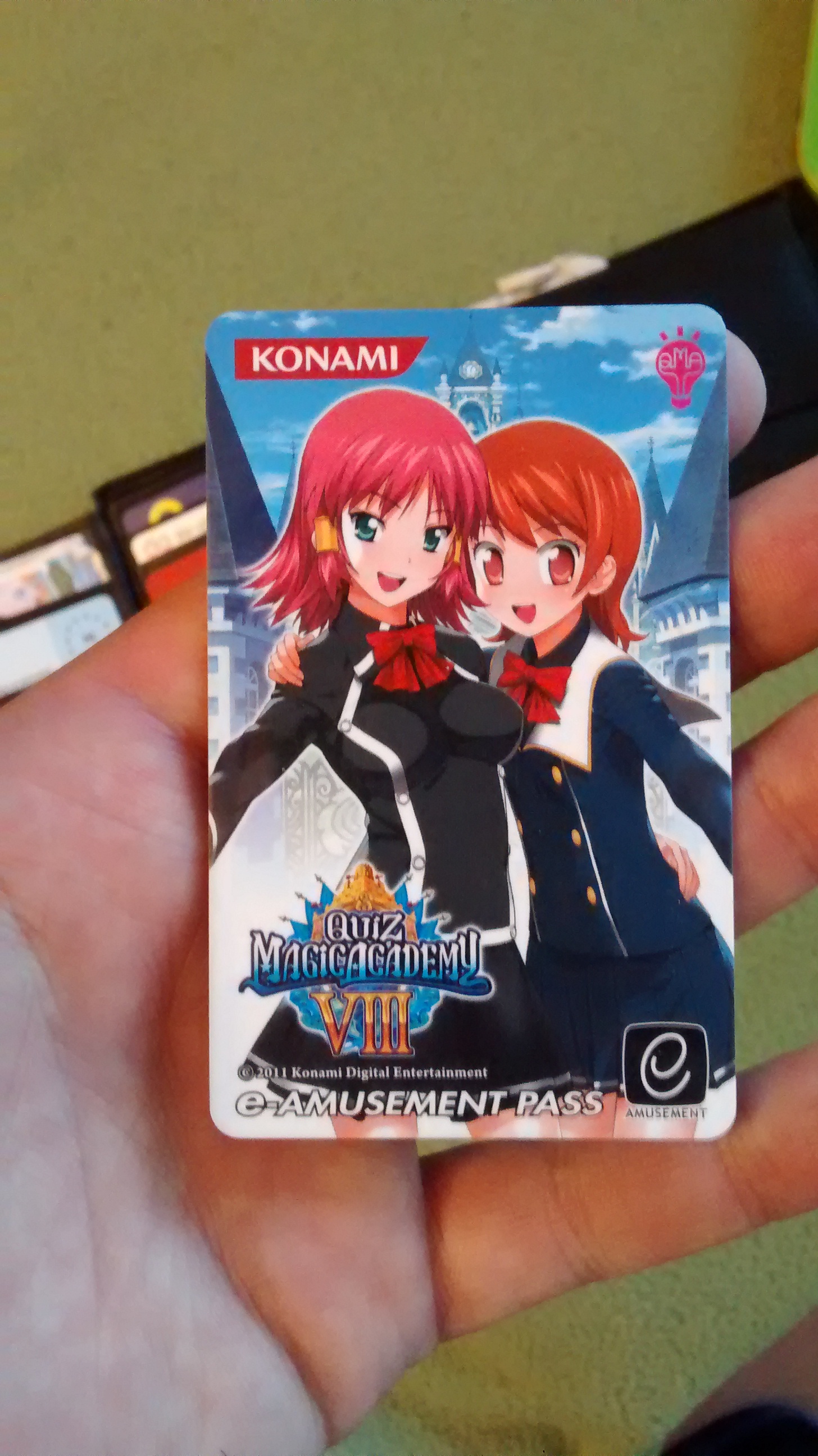 This little gem never left my wallet since last time; it’s my very own e-Amusement pass.
The card keeps track of your progress of various (Konami) games in the arcade halls.

Recently I’ve found out that after 100 days of non usage the card resets itself, unless you register it on the all Japanese Konami website….
Luckily I Google-translated the hell out of that website during my last holiday in Japan, unaware of the fact that it would lift the expiry thing 😉

So, the blog is nearly finished now. just needs a bit more fancy work before it’s complete!
(I can also post updates from my phone and tablet now, so I can post almost everywhere ;-))

For the holiday itself a lot still has te be planned, but I think I covered the most important parts right now:
– Japan Railpass for 21 days is underway (well, the voucher to exchange it for the real ticket at least)
– Flight is booked, leaving on the 6th (arriving on Narita the 7th) and returning on the 27th. Hopefully I’ll get some good seats, but I’m afraid it won’t be a free business class upgrade like last time 😉
– Hotel for the last days in Tokyo is booked. It’s the same hotel I stayed in last time in Tokyo, with a 24/7 supermarket inside!

It’s still a bit under construction at this moment. I hope to add more content soon!