The last few days were mainly about games 😉
When I finally arrived In Tokyo I only strolled a bit through Akihabara, of course found/played a few Pop’n Music games and after dinner I went to get sleep.
I had to get up early since on the 18th the TGS would start!

Sybren managed to get me an “exihibtor” pass, which would give me access to all 4 TGS days (first two are business days, the last two are open for public)

That morning while I was on the train towards the conference center, I searched a bit on the Internet how I would get in.
They would need a photo ID, which was no problem, but it also stated I would need at least two business cards to prove I was with the company… Obviously I didn’t have those, so I was starting to wonder if I was going to rejected at the gate.

When I arrived Rutger was already waiting for me outside the conference center, holding an extra entry pass: It instantly gave me access to the whole conference without having to prove I was actually a developer at this time. Phew!

Yesterday I helped out a bit with the Reign of Bullets stand from developer Critical Bit. Please check it out if you have some spare time! http://www.reignofbullets.com

I also had to cover for half an hour for the guys of Two Tribes, who are the other Dutch developer present at the TGS.
Was a bit awkward when people came by and said “Wow, I really liked your first game”……” Well thank you, but you should really be playing Reign of Bullets! ”

So right now we are on the second day, yesterday it was kinda busy already, but we’ve found out what the visitor numbers of last year were.
On the first day there were around 25.000 people, the second day was a little bit less crowded with 21.000.
When it opens for public it will get massively crowded, probably around 100.000 more visitors!

At the moment I’m just looking around for the newest games, especially the ones where you get free goodies!
This morning I arrived before the press was let in, so I was the first at the Monster Hunter 4G line, which was also playable on the “New 3ds” (it’s a slightly upgraded version of the “old” 3ds, it has a second control stick)

But I won’t bore you with more silly game related stuff, but I do have several photo’s! 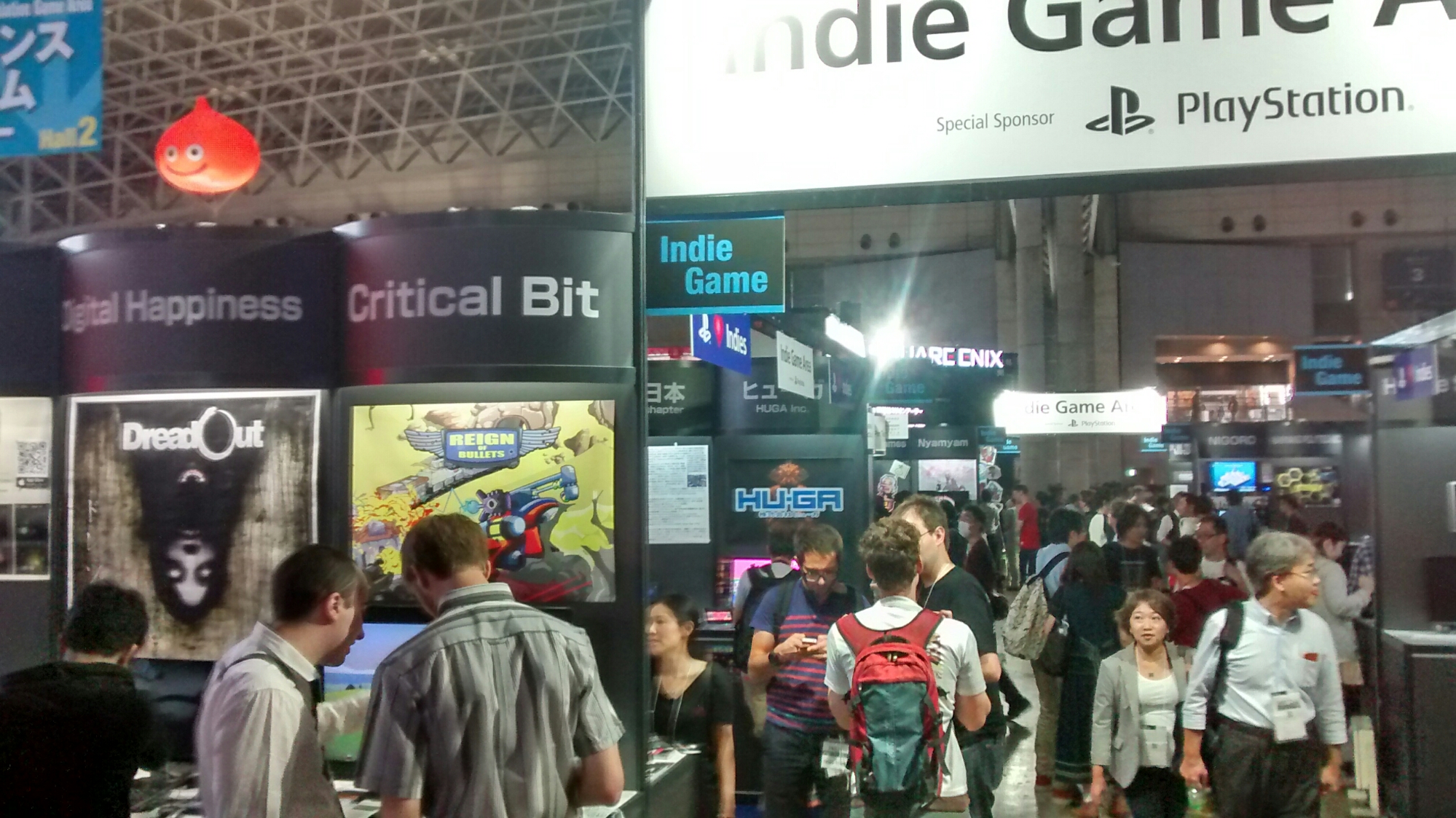 The Reign of Bullets stand! 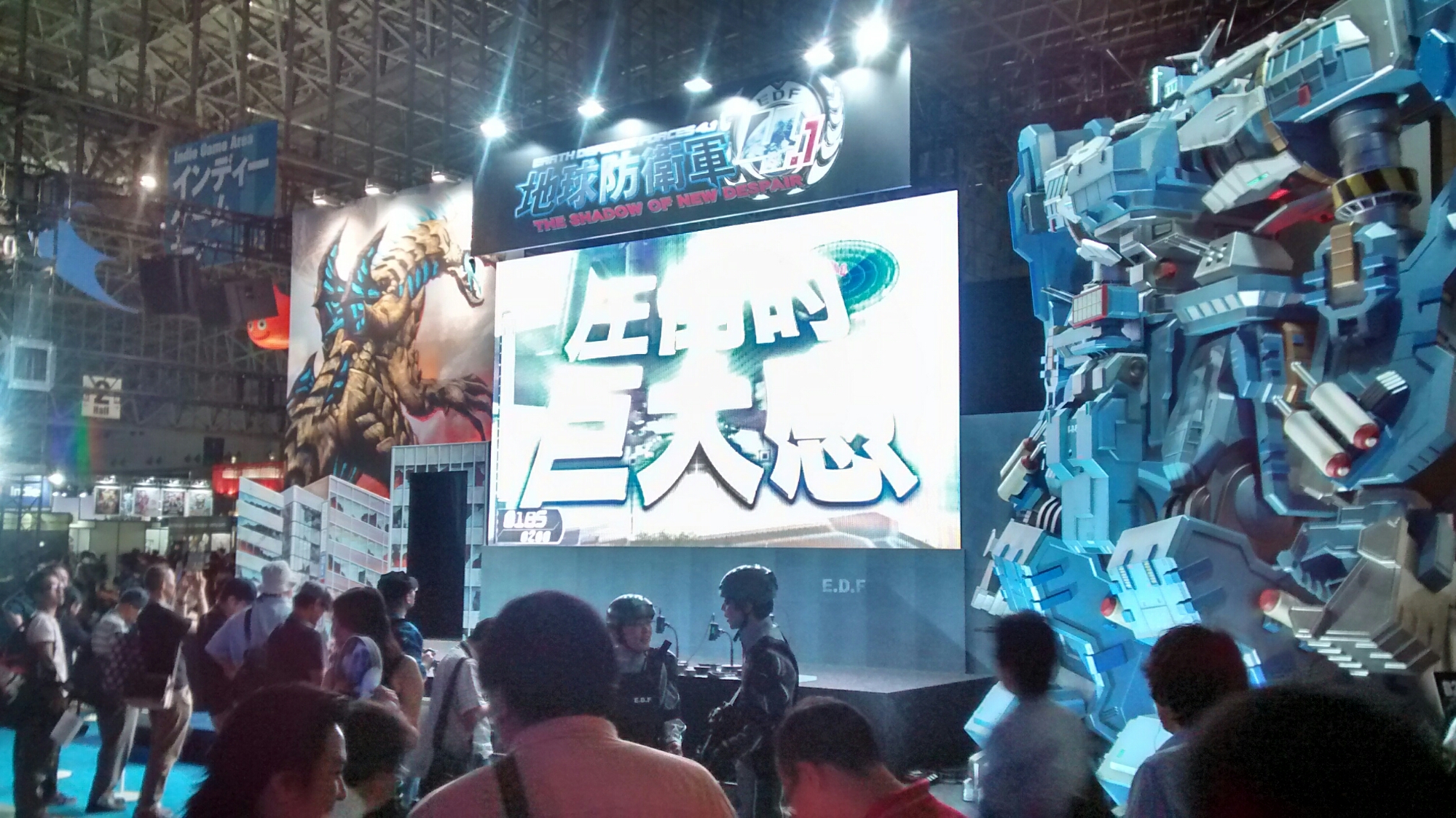 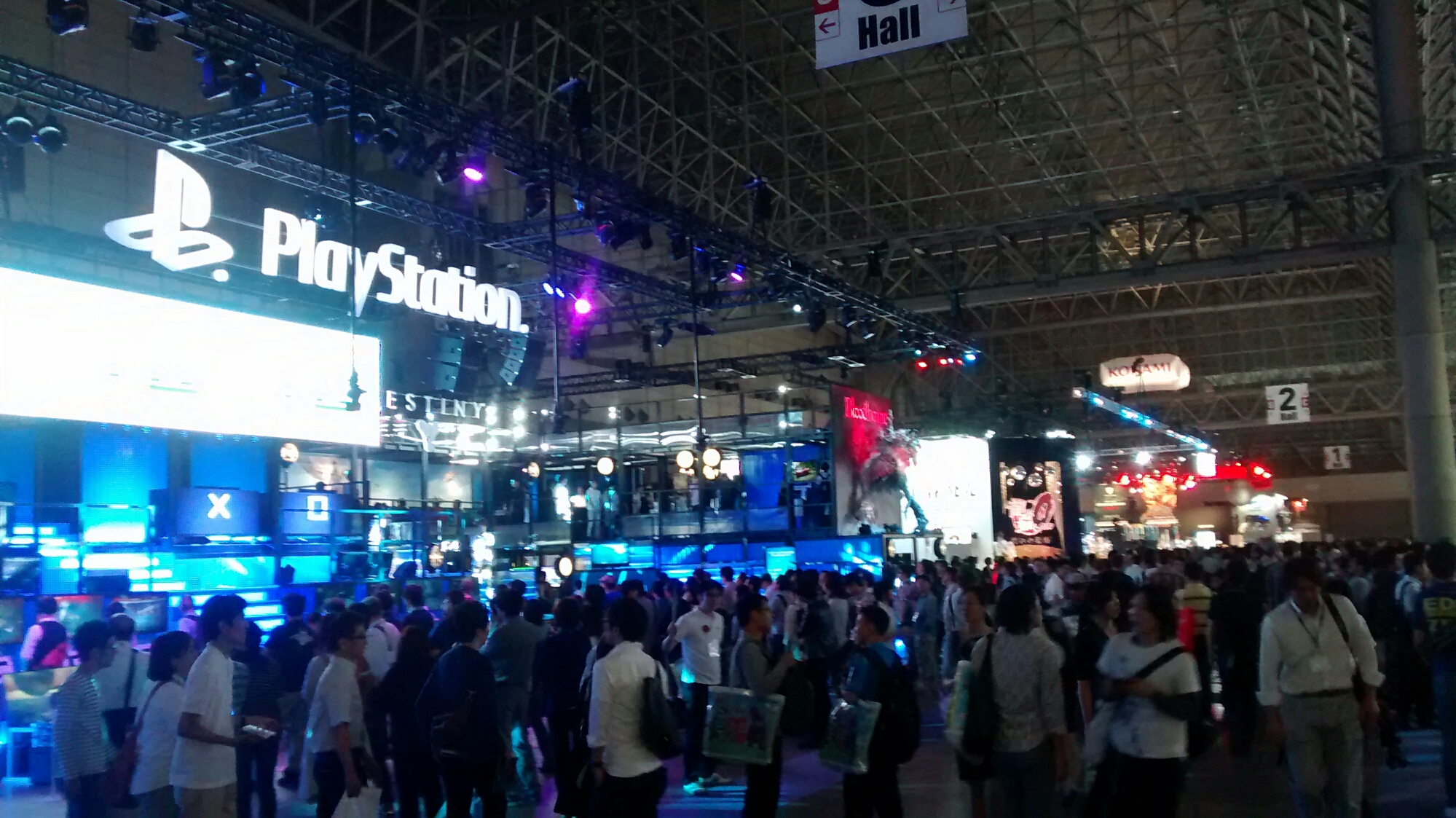 Huge crowd at the Playstation area 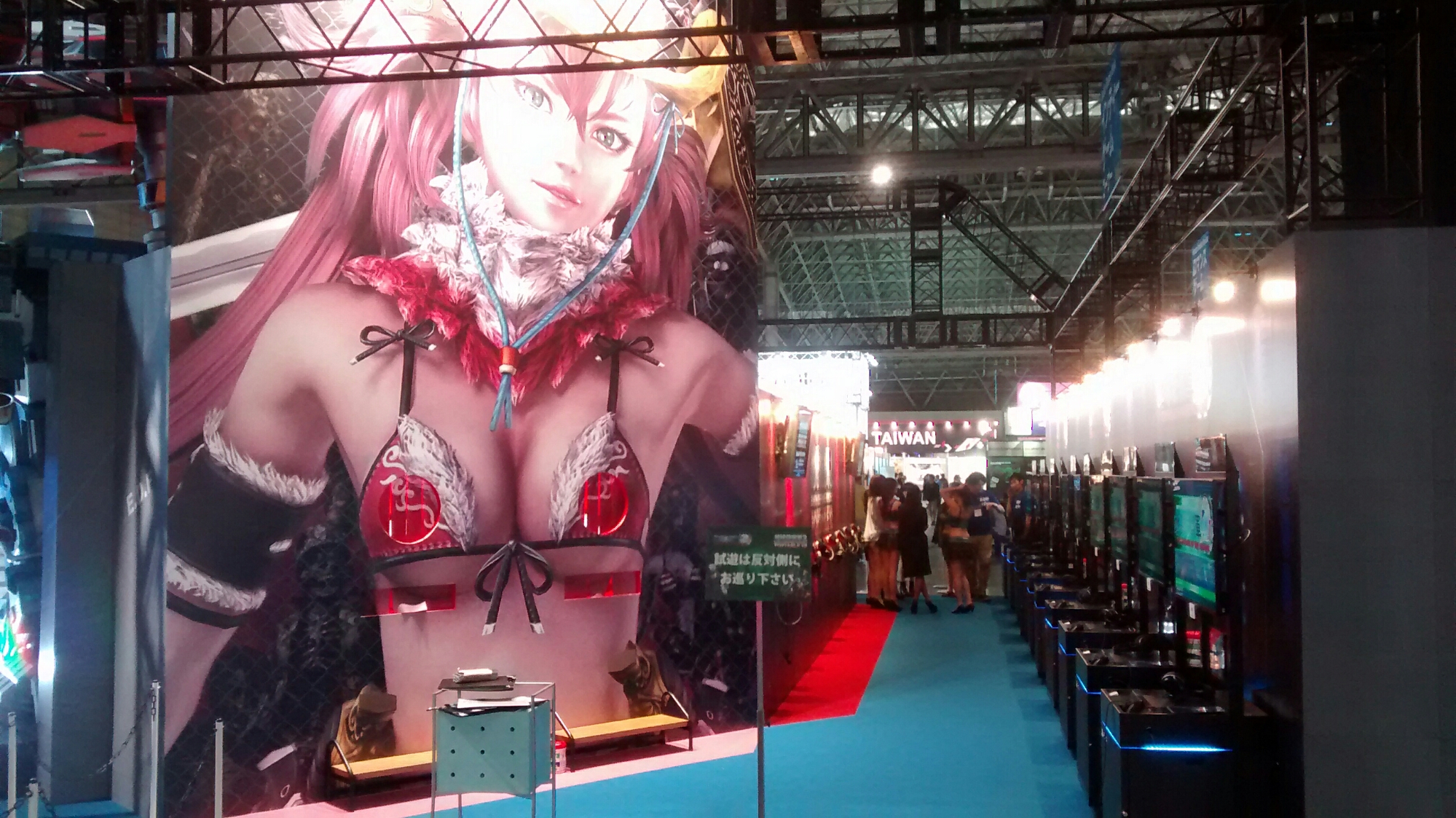 Yeah, you actually had to play the game by looking inside one of her breasts… 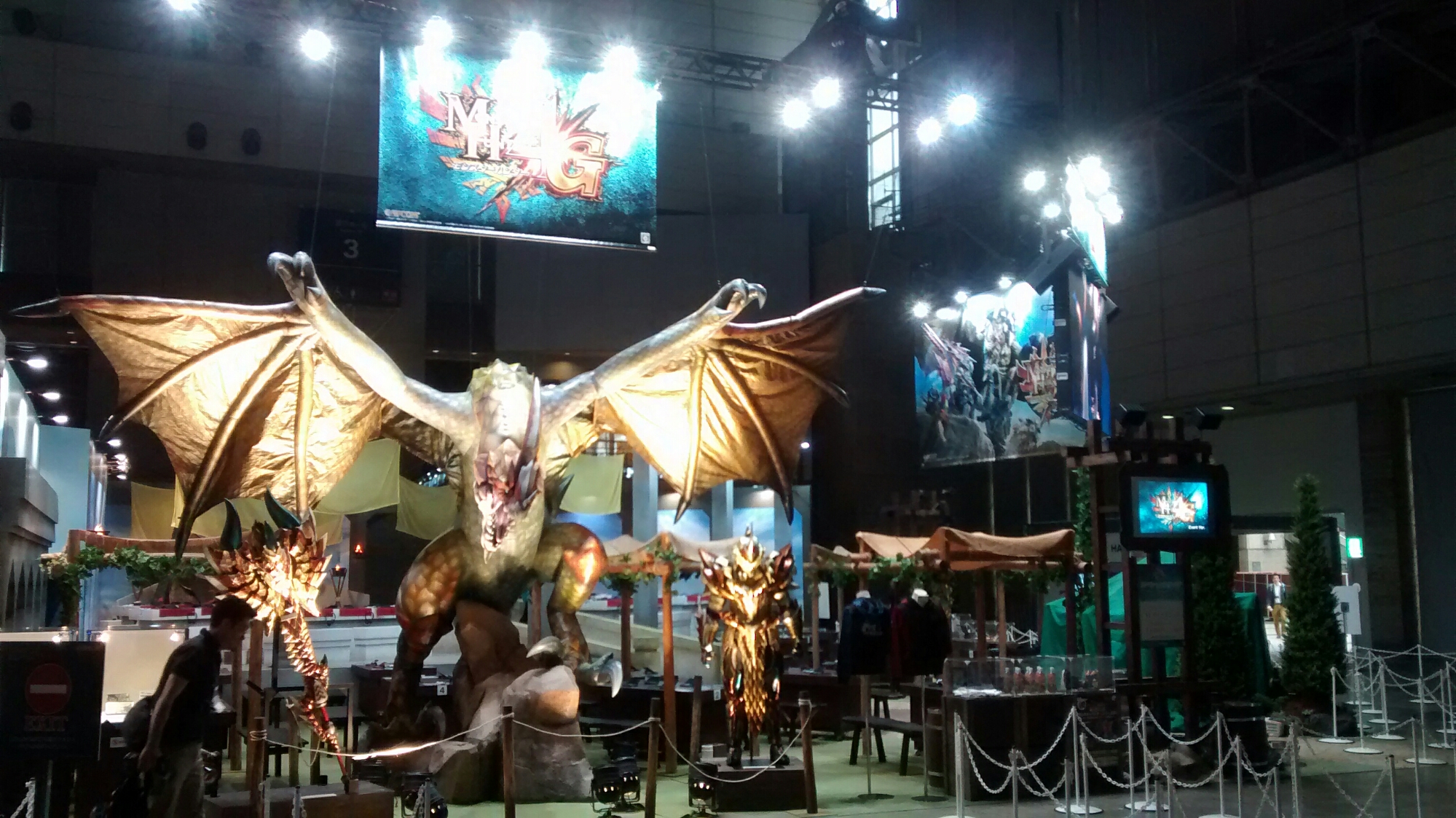 Monster Hunter 4g
From a distance the dragon looks quite awesome, but it’s actually just a large blown up balloon thing.